ATGL is predominantly expressed in adipose tissues but found to a lesser extent in a variety of other tissues and organs, including kidney, skeletal muscle, and heart. Systemic deletion of the ATGL gene resulted in a phenotype with massive neutral lipid accumulation in multiple tissues and cell types. 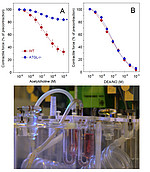 Vasomotor studies with aortas isolated from WT and ATGL-/- mice showed that acetylcholine-dependent relaxation was completely blunted in ATGL deficiency (A). Relaxation to the NO donor DEA/NO, a compound that directly targets smooth muscle cells, was fully preserved (B).