In the 18th century Empress Maria Theresa created a new state-run educational system. Pharmacists were no longer trained within the guilds alone, but had to attend newly established courses at the medical faculties of universities. They graduated as Masters of Pharmacy (Magister pharmaciae).

Franz Hruschauer, a student of Liebig, was the first chairman of the newly established Institute of Chemistry (1850-1858) at the Old University of Graz. Under his guidance the first pharmacy course was conducted in 1853. The pharmacy education was performed in close cooperation with the Joanneum, which was founded in 1811 by Archduke Johann. The Joanneum was a teaching institution and a museum, which housed large Natural Science collections that were used for teaching at the University. 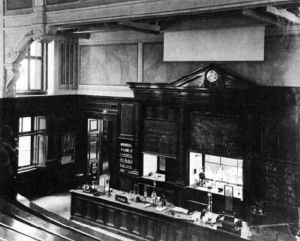 Until the end of the 19th century, the pharmacy curriculum included courses in the fields of zoology, botany, chemistry, physics, mineralogy, and Pharmacognosy. In 1855, a laboratory for pharmacy students was opened to shift the main focus of education from theoretical lectures to practical exercises. From 1858 to 1861, Johann Gottlieb taught the students in Pharmaceutical Chemistry. In 1878, under the guidance of Leopold von Pebal, a student of Bunsen, a new Chemistry Institute was built. Pebal also organized modern equipment for the laboratories. His successors were Zdenko Hans Skraup (1887-1906) and Roland Scholl (1907-1914). In the era of Anton Skrabal (1917-1943), the Institute of Chemistry was divided into three institutes. One of them was the Institute of Organic and Pharmaceutical Chemistry. The chairman of the Institute of Organic and Pharmaceutical Chemistry was Alois Zinke (1943-1963), followed by Erich Ziegler (1963-1978). In 1964, the Pharmaceutical Chemistry became a separate institute with Gustav Zigeuner as head (1964-1990), followed by Werner Korsatko (1991-1995), and Ernst Haslinger (1995-2004). 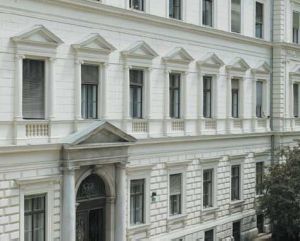 In 1919, Otto Loewi established the first lecture for Pharmaceutical Technology at the Medical Faculty which was supported by the Styrian government. Fritz Wischos, chief of the hospital pharmacy, lectured this course from 1921 to 1932 followed by Ludwig Zechner from 1933 to 1938 and Norbert Schniderschitsch from 1938 onward. During his period, the education in pharmaceutical technology was shifted from the hospital pharmacy to the university where a Department for Applied Pharmacy was established within the Institute of Pharmaceutical Chemistry. Between 1959 and 1969, L. Zechner was again chairman of the Department of Galenics. Christian Knopp (1969-1989), Werner Korsatko (1989-2000), and Ernst Haslinger (2000-2004) subsequently headed this Department of Pharmaceutical Technology. From 1995 to 2001 the Department was an independent institute.